THE AREA AND CIRCUMFERENCE OF A CIRCLE

So much for history. The rest of this article is devoted to
giving some simple, elementary proofs of Ideas 1 through 5
above.

Ideas 1 and 2. I claim that Ideas 1 and 2 are actually quite
obvious, once you think about them for a moment. (I do not
claim this about Idea 3 though.) I will give an informal proof
of Ideas 1 and 2. My informal proof can be turned into a formal
proof in a number of different ways. Let us x some circle Ω.
Let C be the circumference of Ω, A the area of Ω, and r the
radius of Ω. Let k = C/r and let h = A/r2. Now let Ω' be
any other circle, let A' be its area, C' its circumference, and
r' its radius. We want to see that

But I claim that this is obvious, because Ω' can be obtained
by simply expanding or contracting Ω.

. Since our
intuitive notion of area corresponds to the limit of the areas of
approximating collections of squares, T increases all areas by
a factor of

. As T sends Ω onto Ω' it follows that

In summary, Ideas 1 and 2 follow immediately from the fact
that expansions and contractions act linearly on the distance
between two points. The fact that this is so is an integral part
of our geometric intuition. It is the reason why two similar
triangles have the same ratios of side lengths.

Idea 3. Unlike Ideas 1 and 2, I do not claim that Idea 3 is
obvious. The proof of Idea 3 requires a more detailed analysis.
Below I will give some arguments which will reprove Ideas 1
and 2, and also yield a proof of Idea 3.

My goal is to derive Ideas 1, 2, and 3 using "geometrically
intuitive" reasoning. At several points I will even appeal to
a diagram to make my argument. It is well known that such
appeals to diagrams are dangerous, as diagrams can often be
misleading. To give a completely rigorous geometric proof, I
would have to give a list of geometric axioms, and derive all of
my results from these axioms. I will not do this here, because I
would like to keep this article short and simple. The interested
reader is invited to try to translate my proof into a completely
rigorous proof based on a set of axioms.

Definition 1. Let A(r) = the area of the circle of radius r.

To understand my proof, pretend again that you have never
heard of the number π. Now I will define π for you.

In the proof below I will mention the trigonometric functions
sin, cos and tan. Since I intend to use only "geometrically
intuitive" reasoning, I would like to point out that these
trigonometric functions can be defined on acute angles, with no
other assumptions besides the fact that similar triangles have
the same ratio of side-lengths.

For convenience, I will use radians to measure angles. In
so doing, I must be careful to avoid "begging the question."
When we first encounter radians in a mathematics class there
are two important facts we learn. (i) There are 2π radians of
angle measure in a full circle, and (ii) An angle of one radian
inscribed in a circle of radius r cuts o a circular arc of length r.
From these two properties of radian measure we could conclude
immediately that the circumference of a circle is given by C =
2πr. This of course would be a "circular argument." That is
to say, it would be cheating. The reason is the following. Fact
(ii) is usually taken as the definition of radian measure. Then,
the formula C = 2π r is used to see that fact (i) is true. So
it would be cheating to use facts (i) and (ii) in order to prove
that C = 2π r. To avoid this problem I will not assume fact
(ii) above. Instead I will define radian measure so that fact (i)
above holds. That is, let us define one radian to be the same
angle measure as [360÷ (2π )]° . Later, when we have proven
the formulas A = πr2 and C = 2π r, then fact (ii) above will
follow.

Proof. Consider the following diagram, in which o is the center
of the circle, and

oac is a right angle. 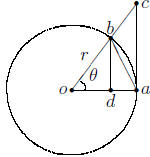 the area of
triangle oab is

The area of the circular segment oab
is

The area of triangle oac is

which is what we were trying to prove.

From the above lemma we can immediately derive a famous
limit theorem.

Corollary 4. If θ is measured in radians, then

Canceling the term π we get

Inverting the fractions and reversing the inequalities yields.

From formulas 1 and 2 it follows that

which is what we were trying to prove.

From the previous two results we can derive the formula for
the area of a circle.

Proof. By taking the limit as θ goes to 0 in Lemma 3 and then
applying Corollary 4 we get.

Now we turn to the circumference of a circle.

Definition 6. Let C(r) = the circumference of the circle of
radius r.

The next theorem will complete the proof of Ideas 1, 2, and
3.

Proof. The circumference of a circle is equal to the limit as n
goes to infinity of the perimeter of an inscribed regular n-gon.
Let us calculate this perimeter. The following figure illustrates
the situation in the case n = 6.

In the figure, we have

So the perimeter of an
inscribed regular n-gon is

Ideas 4 and 5. Finally, we will discuss one elementary way
to calculate approximations to the number π. In Lemma 3
above, let r = 1 and let θ= π/n. The result is the following
inequality.

If we then use the approximation

, we arrive at the
rough approximation

This approximation is rough, but at least we have proved it,
and using very elementary techniques.

The inequalities in 3 can in principle be used to estimate
π with as much accuracy as we desire. If we make the integer
n larger and larger, we will get more and more accurate
estimates. Of course this still leaves us with the problem of estimating
sin( π/n) and tan( π/n). Notice that the solution "use
a calculator to estimate sin( π/n) and tan( π/n)" is of no help at
all. We could of course use our calculator to immediately find
an estimation of π to 8 decimal places. But then we wouldn't
understand how the calculator is arriving at this estimate. The
whole point is to prove our estimate of π using elementary techniques.
The half-angle formulas from trigonometry will come
to our rescue.

and by approximating the square roots we get

and by approximating the square roots we get

As you can see, our method of approximating π is not very
efficient. There are far more efficient algorithms for estimating
π, but we will not go into them here.

A Different Point of View

In the previous section I took the point of view that it is
desirable to prove the formulas A = πr2 and C = 2 πr using
geometrically intuitive reasoning, and using as little abstract
analysis as possible. It is also possible to take the opposite
point of view, namely that it is desirable to prove the two
formulas using no geometric reasoning, and using only abstract
analysis. I conclude this article with a quick sketch of how one
might do this.

Then one can define the sine and cosine functions by the familiar
power series.

With these definitions alone, and without appealing to geometry
at all, one can prove all of the familiar properties of the
trigonometric functions. In particular one can prove that for

Finally, one can
conclude that