Definition 0.1.1 (Power Function). A power function is a function of the form

For this function a negative input is not defined, because complex numbers are required to make
sense of the square root of a negative number.

Using power functions as our most basic building blocks, we arrive at polynomial functions.
One of the most basic ways in which we combine functions is in a linear combination.

Definition 0.1.2 (Linear Combination). A linear combination of the functions

Definition 0.1.3 (Polynomial). A polynomial is a function that can be written as a linear combination
of power functions. Thus, polynomials take on the form

Polynomials provide us with a large class of simple functions to work with. In constrast to
an arbitrary function, a polynomial is very well-behaved, and as a result has a number of useful
properties. As we delve further into the study of calculus we will use polynomials to approximate
other functions, and eventually be able to represent much more complicated functions as infinite
sums of power functions. Such representations are called power series.

In contrast to power functions, exponential functions are functions where the exponent varies
as an input.

Definition 0.1.4 (Exponential Function). An exponential function is a function

Definition 0.1.5 (Logarithmic Function). A logarithmic function is a function

is the inverse function of ax.

Since exponentials and logarithms are inverses, we have

for all a > 0, a ≠ 1. By virtue of this inverse relationship, logarithms inherit a number of useful
properties from exponentials. For instance, by using the relationship

Above we simply use the property that

We can also deduce a rule for the logarithm of a product, noting that the exponential function
ax has a range of the entire positive real numbers

. In other words, for any

there is
some b ∈ R so that

Similarly, for any positive y, we can write y = ac, for some c. As a result, 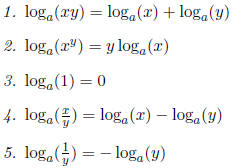 Property 2 above follows if we write

, where m ∈ R. Using the inverse relationship
of exponentials and logarithms we also know x = am. Thus,

Taking the base a logarithm of each side of the above equation,

The third property is simply that a0 = 1 for all a. Properties 4 and 5 are written only for
convenience - they follow immediately from the previous three properties. Can you see why?

Given that for any value of a > 0, a ≠ 1 we have both an exponential and corresponding
logarithmic function, we have access to a plethora of functions through exponentials and logarithms.
However, as we noted previously, we are currently unable to evaluate exponentials for all but a very
small set of numbers. Similarly, we have difficulty in actually finding the values of logarithmic
functions. Thus, even though we have defined this large class of functions, and have found that
they have a number of useful properties, we still cannot actually evaluate them in most situations.

Although exponential and logarithmic functions define infinite classes of functions, we are really
only interested in a single function from each of these classes. The exponential function we will be
interested in is the base e exponential, where e is a specific irrational number, defined by the limit

Because this function is used so much more often than other exponential functions, it is often
referred to as the exponential function. Do not worry about understanding the above notation -
as we delve into the study of limits and sequences it will begin to make sense. Corresponding to
the base e exponential, we are interested in

, the natural logarithm, which is often written
as ln(x). The graphs of these two functions are given in figure 1.