Theorem. If the columns of C each sum to less than 1, and the entries
in

are non-negative, then (I  - C) is invertible, and the production vector

has nonnegative entries and is the unique solution to

Expanding the problem.
If the external demand is

, the various sectors can produce

units, but this
will create an intermediate demand of

.
They can then produce another

units. This leads to further intermediate
demand of

They can then produce another

units. This leads to further intermediate
demand of

Adding up all of the above, in total the industries have to produce this to satisfy
the external final demand as well as all of the internal demands that arise as a
result.

If the columns of C each sum to values strictly less than 1, then

if the column sums of C are less than 1. We can make the approximation as
accurate as desired by making m sufficiently large.

In practice, this can be a useful approximation, especially if the matrix is large
and sparse (i.e., contains many zeros) and the column sums are significantly
less than one. Even a standard linear system

can be rewritten to use
this trick, by letting C = I  -A. Then we can write the system as

, say we have found the solution (production vector)

Say we have solution

because everything is linear.

Then we have solution

, we need to increase production from

Result:The jth column of (I  - C)-1 says how much extra production will
be needed from all sectors, to meet one additional unit of demand for sector j.

Because the production vector

contains the production levels for each sector,
and because

, we can go even further, and get.

Result :The number in row i, column j of (I  - C)-1 says how much extra
production will be required of industry i in order to meet an increase in exter-
nal demand of one unit of sector j, taking into account the new intermediate
demands which arise.

This could also be written as the partial derivative

Subspaces
Definition Given a set W of vectors (such as Rn), a subspace of W is any
subset

satisfying three properties.
a. The zero vector is in H
b. If

are in H, then

, then for all scalar constants c, the vector

is in the span of

, which is in H since it is a linear combination of

(and therefore in the span of

for some constants r1 and r2. Then,

which is in H.

Example 2. Line L in R2 not through the origin.

. (Read the colon as "such that" or "satisfying".) Check the three properties.

Definition. The null space of a matrix A (written "Nul A") is the set of all
solutions to the homogeneous equation

by definition of this H.

Definition. A basis for a subspace H is a linearly independent set in H that
spans H.

are a basis for Rn. In fact, they
are called the standard basis.

Example 6: Find a basis for the null space of the matrix

Write the solution to

is a linearly independent set. So in fact it is a basis for Nul A.

This always happens, because.
1. When we write the solution set to

in parametric vector form, the
solution set is always the set of all linear combinations of the vectors attached
to the free variables. That is, those vectors always span Nul A.
2. For a general matrix A and the equation

, if xi is a free variable,
think about the ith position in each of the vectors in the parametric vector form
of the solution set to

. That position will be 1 in the vector which
goes with xi, and will be 0 in all other vectors. The same holds for the other
free variables. So the only linear combination of those vectors which gives

will be the trivial linear combination, i.e. the vectors will always be linearly
independent.

So any linear combination

can really be written as

spans Col B. Also, the set

which is
clearly a linearly independent set.

, this also means that

. This in turn
implies that

If you check, you will find that A is row equivalent to B on the previous page.
In fact, B = rref(A). The fact that A and B are row equivalent means that 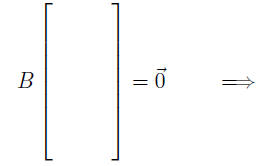 This in turn means that

are the columns
of A. So the same tricks we used with B will work for A, and in fact

is a linearly independent set (you still need to give it a little
bit of thought to fill in the details to see this).